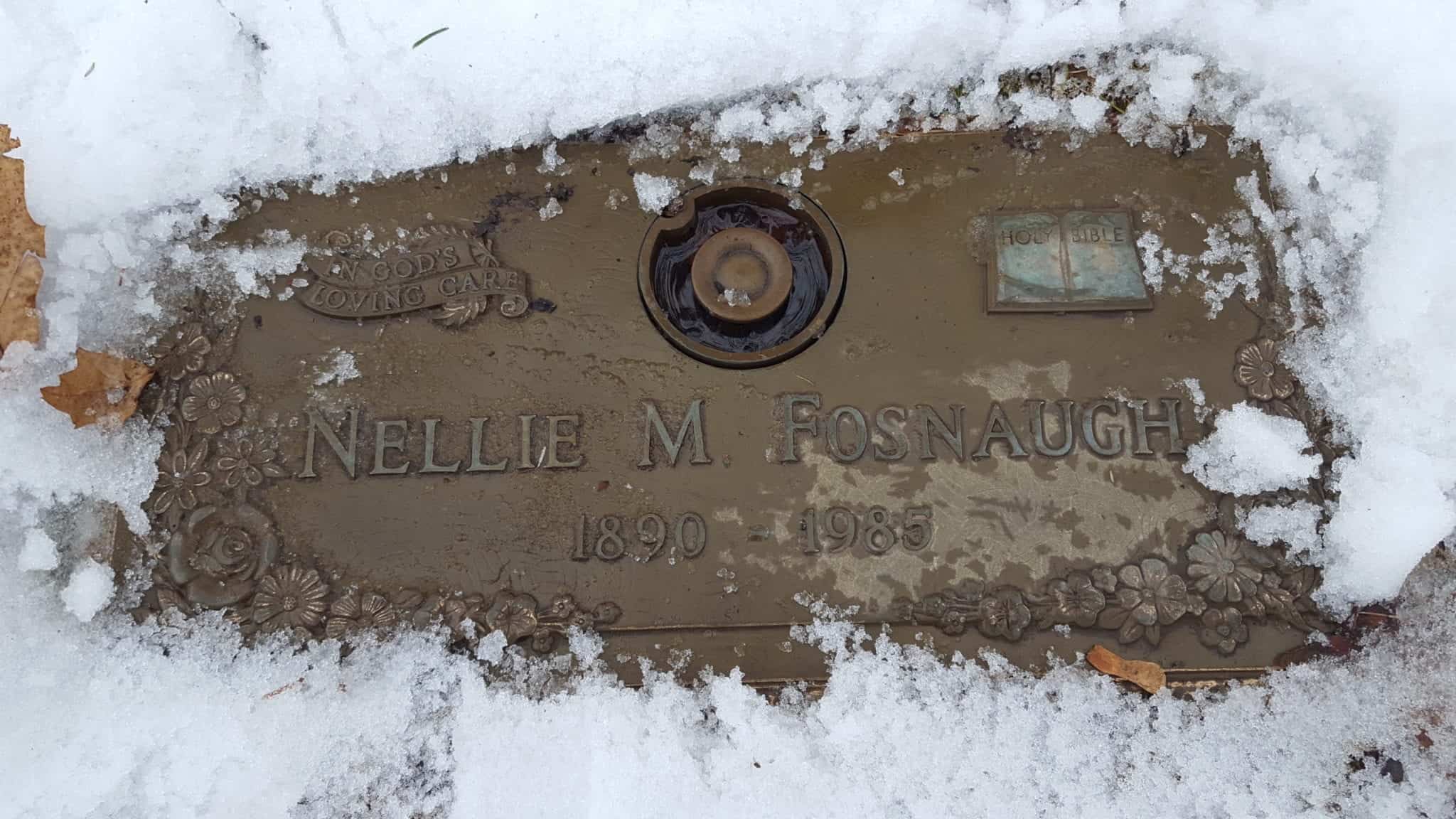 Snow had graced her simple headstone with white, embellishing a life of poverty with a garnish of royalty.  In similar fashion, winter’s kiss had regally adorned the muscular branches of the red oak that stood as a broad and gentle sentry above her grave.  She had always wanted to be buried under an oak tree for the simple reason that poverty, despite how severe it had been, never thwarted the invitation of any tree to climb into their canopies and rest in their embrace.  And so, she had repeatedly scaled them as a child, perching in their lofty branches so that she might leave the world of destitution and poverty to run in the world of clouds and sky.  When age rendered her incapable of managing the ascent, she would sit, longingly stare at them and let her mind scramble up their trunks and perch in their lofty branches.  And the very trees that had extended such a generous invitation every day of her ninety-five years now stood as an attentive sentry over the place where she ceased climbing the trees of earth and began running the wilds of heaven.

Kneeling in winter’s frosty stillness, I pulled off my gloves, gently brushed back the snow from the headstone and ran tentative fingers over the lettering.  1890 – 1985.  Against all odds, it was a life long-lived and well-lived in the living.  It was a life that had lived in a world of destitution and poverty all the while living above that very world, much like climbing the trees of childhood.  It was an utterly amazing feat carried out by an amazing woman who discovered the amazing power of being relentlessly and restlessly thankful.

My grandmother was impoverished in possessions and yet gloriously rich in her person.  She was light, listless and enduringly joyful, though neither her belongings, the wounds that detailed a litany of injustices, nor her seemingly scant successes would logically explain such a demeanor.  She possessed little, meandering throughout her meager house with the scant appointments dressing out her modest domain.  Yet, in possessing nothing she possessed everything.

She had expended part of her life surviving the brutality of the Great Depression, left greater by the exit of an unfaithful husband.  In those darkest years of soup lines, Hooverville’s and scant hope, she would feel the scourge of impoverishment twice and then some.  She would struggle to feed her four children as a single mother at a time when a nation was struggling to feed itself, all while attempting to explain to her children that to live right is not necessarily to be treated right.  Of her five children, one would die at birth; being robbed of everything that she could have been.  Another would die of tuberculosis at twenty-one, just barely beginning to become everything that he was going to be.  And yet a third would precariously skirt the fringes of death, only to recover with the trauma of the experience haunting her for years.

My grandmother existed on the sum total of the pennies, nickels, dimes and the occasional dollar that she collected in her small, floral change purse.  Clothes were mended…repeatedly.  Shoes were fixed until they couldn’t be.  The trolley was her transportation, and the friends that she made on it were her delight.  Day-old bread was considered as good as fresh.  If it happened to be wheat, it was a delicacy.  She baked eighty pies a day at a small diner that served people a smile, a cup of hot coffee, and a bit of conversation.  The job put a few dollars in her purse and a boisterous spirit of thankfulness in her heart.  The furnace was kept low and the lights were kept the same, but none of that cooled her spirit or dimmed her heart.  And although I did not live these things, I am deeply thankful for the lessons that her life taught me.

Being Thankful for the Lessons Granny Left Me

Despite it all, she was always thankful.  Indeed, that is the lesson behind most lessons.  And because she was thankful, she would never evaluate her life based on the rubrics that men apply to lives such as hers.  She would not appeal to the tenants of justice as they assumed that mankind possessed the right to avoid all that is wrong in a world that had long forgotten that a great wrong sets the stage to do a greater right.  She would not play the victim, for that was to miss the fact that defeat holds the raw ingredients from which the greatest victories are crafted.  She would not bemoan what she did not have for that was to miss celebrating what she did.  She would not complain as that was to focus on what did not happen instead of focusing on what could.  She would not seek the security of wealth or material comforts for she understood that those were places to hide, and that hiding never eliminated what you were hiding from.

Because she was thankful, she believed that the course of the day did not represent the course of one’s life.  That victory was not based on the nature of any outcome, but on the fact that one stood by their values even in the face of the most devastating outcomes.  She believed that life was a privilege even when it didn’t feel that way, and to embrace it as such would always rekindle that sense of privilege regardless of the darkness of the circumstances.  She believed that having nothing was a great gift because there is a great good to be learned in poverty that would be forever lost in the blind acquisition of material things.  She believed that fear was the absence of faith and that faith would leave us with the absence of nothing.  And above it all, she believed that God held every tear in the hallow of His hand, and that each one that she had cried was intermingled with a thousand of His own.  And that someday He would welcome her home, draw her deep into His embrace and let the tears of both spill on the floor, never to be collected again.

I stood up, brushed the snow off wet knees and scanned her headstone, drawing its features and forms into some place of the deep soul.  With increasing depth, I slowly realized that the key to it all was that she had lived a thankful life.  But it was more than that.  Far more.  It was a ‘deeply’ thankful life.  Not in the form of some cherished ideal that she held, or a practice made habit, or some socially appropriate attitude that she became adept at.  That wasn’t it.  Rather, it was a thankfulness that was cultivated to the point that it saturated her being and came to define who she was verses simply being something that she did.  A thankfulness that was blatantly revolutionary, even though few would ever have the privilege of beholding it.  A thankfulness born of a hard life, of cherishing little things instead of seeking many things, of diligently working to see blessings where others saw nothing, and of understanding that God’s greatest gifts are not that of material things but of inner things that will walk with us into the next life when everything else will fall away in the transition.

Standing there, finding myself holding my life up against hers, I realized that what she was, I was not.  That maybe I need to go mend some clothing instead of assuming that I deserve new.  Fix a few shoes so that I begin to appreciate every step that I take.  Ride a bus and meet a friend because I finally gave my journey enough space to intersect another.  To get some day old bread every now and then to better appreciate it when it’s fresh.  To see my occupation as a privilege instead of a paycheck.  To turn down the lights and lower the heat in order to learn that my comfort doesn’t rest in what’s outside of me but what’s inside of me.

And Then…To Climb a Tree

Shifting my gaze and looking up at the sprawling oak, I thought that maybe I need to go climb a tree…metaphorically anyway.  I thought, maybe I should do that the way my grandmother did it, by being thankful for the things that she was thankful for; the stuff of bread and shoes and trollies.  Or more broadly, maybe I need to do so by finding something to be thankful about in everything.  To seek out the good and be thankful for the fact that is it always there to seek out.  To pursue a sense of gratitude when the world sees nothing but nothing.  To give optimism a hand up, knowing that behind the mask of pessimism there is nothing more than this pathetic fear that spends every waking moment fearing that we might actually succeed.  To say “thank you” at the very times where I’d prefer to say “no thank you.”  For as I’ve pondered it all, I realize that these are the precious lessons of my grandmother.

And in rigorously implementing these lessons, will I find myself scaling the kind of tree that we’re all looking for?  The kind that my grandmother climbed?  Every day.  Will I have a chance to perch in their lofty canopies so that I might leave my world of personal destitution and emotional poverty to run in the world of clouds and sky?  And will these kinds of trees be there for me until I am called to run the wilds of heaven?  In this world, is that really possible?  Is it?  What I know is that my grandmother did it with great grace, and in the doing she forever answered that question.

It has been years now.  And since that visit to my grandmother’s grave, I’ve yet to have that sense of thankfulness seize my soul as it did hers.  I’ve yet to have it saturate my being and come to define who I am verses simply being something that I do.  However, without reservation I can say that I spend far more time in the trees than I ever have before.  I sit on many limbs these days, working to live out the stuff of bread and shoes and trollies.  And from this blissful vantage point, I look up into the world of clouds and sky a little more each day and shout, “Thanks granny!”

The way to quit digging holes is to get rid of the shovels and stay away from the dirt.