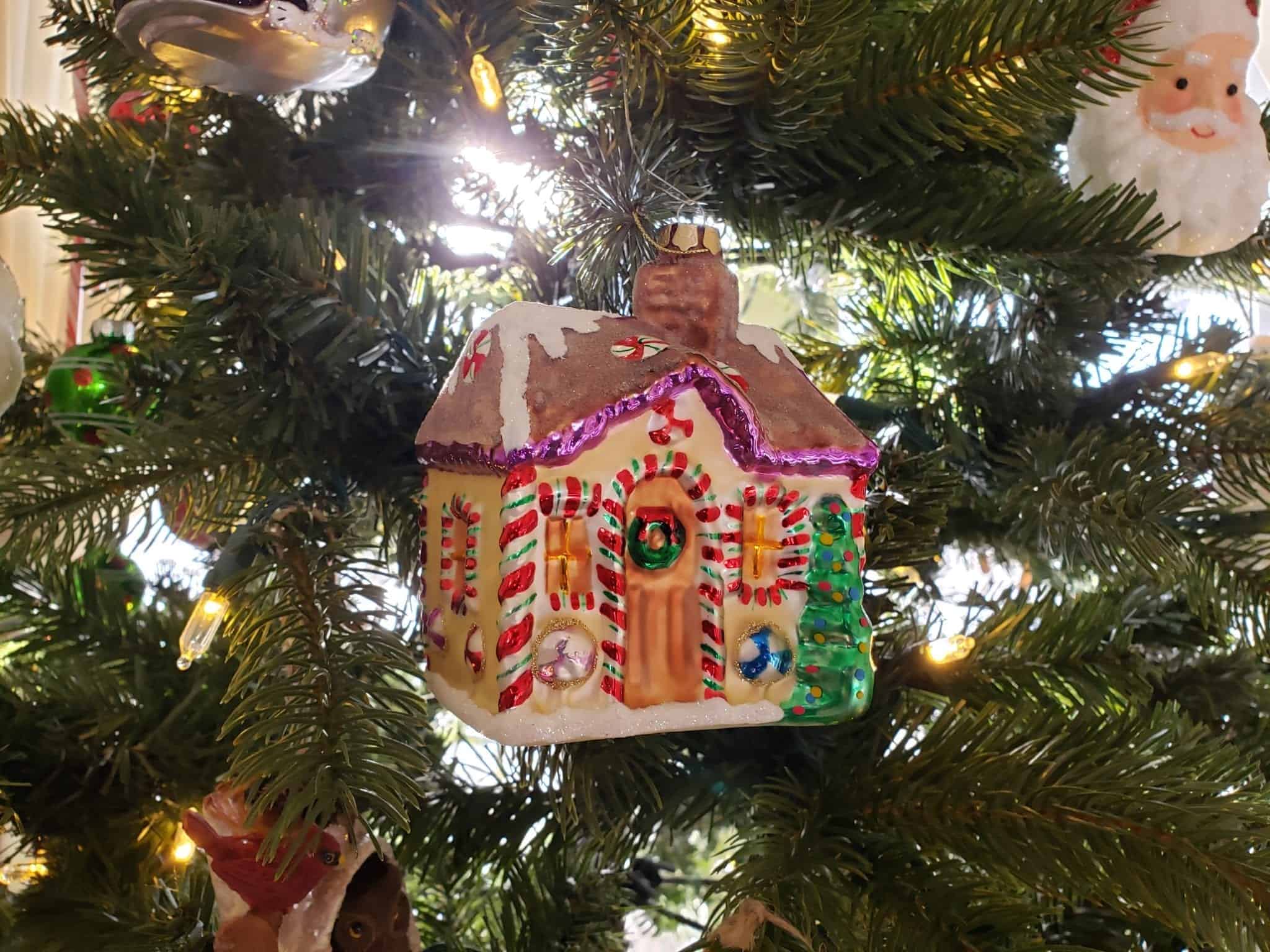 I don’t know how I got it or where it came from, but Mom always said it was mine.  Sometimes we are gifted small things that appear to be the epitome of small things.  Yet, lifetime treasures are always packaged in small things because only small things have enough space to hold something that large.

The Christmas tree was always tastefully decorated in a manner that lent something of royalty hemmed with the slightest touch of magic.  It was a delicate but nearly ingenious balance of luxuriant color sprinkled lightly enough that it set you on the edge of wonder, leaving you wholly captivated but always wanting just a bit more at the same time.  It was bedecked all around with an array of ornaments both brilliant yet tasteful that listlessly took to dancing with the reflection of the lights.  And it had just enough tinsel to weave the magic together, cinch it tight, and draw the rest of the tree up to a glorious pitch.  As a kid, at times I almost couldn’t stand to look at it, but at the same time I couldn’t stand to take my eyes off of it.  It was small, but lifetime treasures are always packaged in small things because only small things have enough space to hold things that large.

One of those many ornaments was mine.  I don’t know how I got it or where it came from, but Mom always said it was mine.  It was a simple little Christmas house trimmed in freshly fallen snow sprinkled with generous touches of glitter.   There was a single tiny pine tree at one end, standing heavy with the same snow that bedecked the small house.  On the simple front door there was a tiny green wreath sporting a brilliant red ribbon.  And it lived in the small neighborhood of lights, ornaments, tinsel and magic.  If a kid could somehow imagine a terribly magical place that held the whole of Christmas in one place, this would have been it because only small things have sufficient space to hold something that large.

Over thirty years later, it was a different kind of Christmas with a different kind of smallness.  Much like the ornament, life had come and gone, both generously giving and violently taking in the coming and the going.  The magic of life had long rubbed off, although it had been replaced by a much more durable kind of magic.  That last Christmas morning I had awakened unexplainably early.  Something shook me awake, it seemed, gently rousing my soul and tenderly refusing to let it fall back into a winter’s slumber.  Relenting, I finally decided to descend the old oak steps and sit a bit with this sleepy Christmas morning before the sun rose to reveal the unfolding magic.

As I did, to my surprise I found my Mom sitting in front of the old oak and marble fireplace with her Bible in hand; a single light dimly illuminating the scene.  I walked up to her, smiled, bid her a “Merry Christmas,” leaned down and gently hugged her aging shoulders.  What followed would have been the stuff of small talk to most, yet lifetime treasures are always packaged in small things because only small things have sufficient space to hold something that large.

Mom turned and stared into the dancing flames that had rubbed the old fireplace to a golden warmth.  Falling into some marvelous place deep within her, she slowly began to recite her fondest memories in words so rich that she seemed to have pulled them up from a dusty past and lovingly breathed the fullness of life back into them.  She spoke of dreams achieved and some left behind because life did not make space for them; of the joy of her unrelenting investment in our lives that always offset whatever loss such an investment might have demanded.  She spoke of great struggles that were always tempered by a far greater peace.

She let me into places that I felt far too sacred to trod and threw open both her heart and her history in ways that left me stunned with a joy of the greatest sort.  I was granted permission to tread the byways of her life, with magnificent excursions off to places that I had no idea existed and other places that I thought might have existed but felt would be forever left to the muse of history and speculation.

The smallness of the ornament that had held so many large things for me as a child had passed many Christmas’ ago.  Now, these lifetime treasures were packaged in the smallness of Mom because only small things have enough space to hold something that large. And like the ornament of years ago, I don’t know how I got this treasure or where it came from, but Mom made it mine.  With the exception of one, I cannot think of a greater Christmas gift.

Christmas Where Christmas Came From

Mom was to unexpectedly pass away the following October, returning to where the God of Christmas had started His own journey.  At the time of her passing, we had assumed that most of her friends were likely deceased, or had long forgotten her in the living of their own lives, or had moved to parts unknown.

Yet, on the morning of her funeral, the little church sanctuary swelled to capacity.  The smallness of this woman had run as a torrent into and through the lives of these people who sat shoulder to shoulder in each pew.  One after the other, people lined up to tell us the stories of Mom.  It was that Christmas morning all over again, but it was told from the vantage point of countless people who had encountered this terribly small life.  It was something endless that was still pouring out of the smallness of Mom’s life even after that life on earth had concluded.  If I could somehow have imagined a terribly magical place that held the whole of life in one place, it seemed that this small space called “Mom” was it, for lifetime treasures are always packaged in small things because only small things have sufficient space to hold something that large.  And that was Mom.

Like Mom, it is when those packages are opened that world’s change, lives are altered and history is moved.  These packages walk about unnoticed because they are small, like Mom.  The world pays them no mind because the world looks for big things in big things, which may explain why this ‘big’ world is such an empty one.  But they are there…untold millions of them.  They are sitting in living rooms, being rubbed warm by fires of all sorts.  They are facing great struggles but finding great peace.  They stand ready to let us into places that are far too sacred to trod and throw open both their hearts and their histories in ways that will leave us stunned with a joy of the greatest sort.  If asked, it is altogether likely that they will grant us permission to trod the byways of their lives, with magnificent excursions off to places that we had no idea existed and other places that we thought might have existed but felt would be forever left to the muse of history and speculation.

However, the greatest small package in all of history came to us one Christmas night.  He came in the squalor of poverty, born into a place far off the road of commerce, industry and importance.  He was entrusted into the hands of two frightened teenagers who themselves grew up in the backwaters of nowhere.  The cries of this newborn were ignored by a world off to greater agendas from which this child would rise to save us.  He would garner the praise of shepherds who led sheep and Wisemen who led nations, for no matter our social standing we are all capable of seeing great things housed in the folds of small things.  In the end, He died a criminal’s death surrounded by a handful of followers who refused to do anything other than a chase a God who, through His death at that very moment, was chasing them.  For you see, eternal treasures are always packaged in small things because only small things have enough space to hold something that large.

We are small, but thank God that we are for I would wish to be nothing other for only then can I hold that which is large.  And it is my prayer that you stare in the vast smallness of who you are, and much like Mom on that last Christmas morning you open up that vast smallness to another; to a spouse who is hurting, to a child who is lonely, to a sibling who has wandered away, to a stranger who is starving just to be touched, or to a friend who has found the hope of hope forever lost.  May the largeness of your smallness spill ‘round about those you love and surge through each of them in whatever way they need that to surge through them.  Every day might we commit to doing what Mom did on that last Christmas day, for giving the smallness of yourself is one of the greatest gifts that you can give.

And as you do, may we remember that the vastness of our great God was born into the smallness of this Christmas child so that He can meet us in the vastness of our smallness.  Might we ponder the miracle that the God of infinite galaxies light years beyond our imagination found ample space in the smallness of a baby.  And much like that small ornament, I don’t know how we got this gift from God or where it came from, but Mom always said it was ours.  And maybe the best gift that we can give to those around us aside from our own smallness is the smallness of the Christ child so that He will become their vastness as well.

It’s not the length of my stride. It’s the fact that I’m walking.