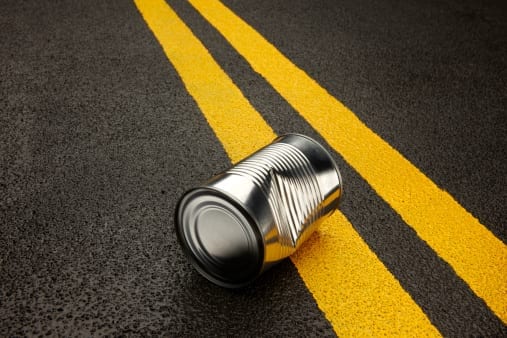 Versions of Kicking the Can

Yet, things don’t go away just because we want them to.  Problems don’t get solved just because we’re annoyed with them.  ‘Avoidance’ is not some sort of practiced slight-of-hand where the things that we’re avoiding magically vanish under the silken cloak of avoidance.  ‘Denial’ is not some ingenious, multi-purpose tool that fixes whatever problem is that we’re in denial of, somehow busily working away behind the scenes while we’re sitting in denial of the problem.  We all have things that we just don’t like to do, so we kick the can down the road.

Kicking the Can Implies Acceptance of the Can

In kicking the can, it’s not that we’re in denial of the issue, or the commitment, or the obligation, or the deadline that we’re working so hard to avoid, or the self-made mess that we want to forget about.  Kicking the can down the road implies that we’re accepted the galling reality that whatever it is that we’ve avoiding, it’s something that’s not going to go away; at least on its own.

Kicking the Can Is an Action Based on a Decision

Kicking the can down the road is an action.  It represents the decision that we’ve made about whatever it is that we’re avoiding.  It’s a conscious decision to placate responsibility, postpone the inevitable, deny our poor choices, pay a legitimate obligation forward yet again, and momentarily pretend that all is good so as to avoid any discomfort around that fact that all is not good.

Kicking the Can to Pawn It Off

Sometimes kicking the can down the road is done out of some pathetic hope that somebody else is going to pick it up and take care of it for us.  Maybe if we kick it down the road long enough and hard enough somebody else is going to get tired of watching us do it, or feel bad enough for us that they’ll take care of it.  Maybe we’re actually kicking the can in the direction of somebody as a means of baiting them a bit and hoping they’ll get rid of this for us.

Kicking The Can is Often Blaming the Can on Someone Else

If we can ignore the issue long enough and distance ourselves from it far enough, we can often make it look like we really have nothing to do with it at all.  But more than that, it’s often a way to distance the issue or the mistake or the blunder so far from us that it actually looks as if it belongs to someone else.  Suddenly, kicking the can down the road becomes an act of kicking it over onto someone else’s road.

Kicking the Can Will Kick Our Can

There are implications for kicking the can down the road.  Sometimes those implications are serious beyond whatever the issue was in the first place.  The reality of life is such that avoiding most things means that those things will become worse in the avoiding, not better.  So kicking the proverbial can down the road only increases in the size of the can.  And when that happens there will come a time when it’s too big to kick any longer.

We all have our cans.  Some are small and some are anything but small.  It’s time to identify our cans, as grueling and distasteful as that might be.  Once we’ve done that, it’s time to quite the kicking and start the resolving.  The road to resolution might be a rough one that demands much of us, but it will not demand as much of us as it will if we keep on kicking the can.  It might be wise to consider adopting a can free life and giving up a kicking career.